Living on a houseboat is not without its challenges. The fact that our boat was once an open deck freighter only added to its quirkiness. Most people we met found it rather extraordinary that four women ranging in age from 70 to 80 would choose this mode of living. After all, the deck was on a 45 degree angle, there were no railings except on the slippery metal gang plank, the stairs were narrow and steep, and we were given no instructions on how anything worked. We were left a list of rules. I still laugh when I read them.

What could possibly go wrong?

Getting our luggage inside was our first ordeal. We worked like a chain gang passing each piece from one to the other down those stairs.

Our next concern was the washroom situation. We had chosen this boat because it had 2 bathrooms, but the second bathroom might as well have been in another country because there was no way to maneuver along that narrow passage to the far end of the ship in the dark of night or in rain. It’s a given that with age comes frequent peeing, especially during the night. To give some perspective, I took this photo from the doorway of the bedroom. Now imagine making your way in pitch dark (two were sleeping in the bed you can see) from the bedroom to that door on the left side at the far end, navigating furniture, loose floorboards, a substantial tilt, and a multitude of squeaks while under the influence of a little wine. We became experts! 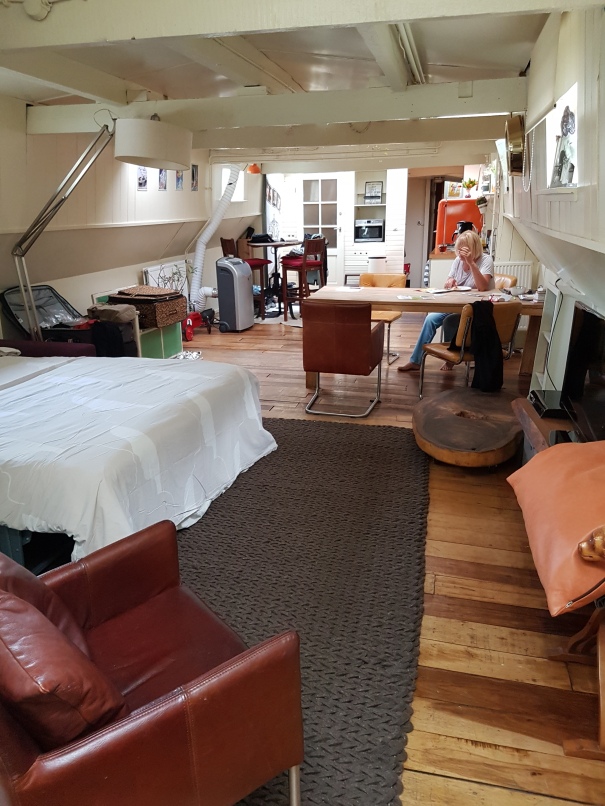 In the middle of the night, I would stand in the doorway until my eyes became accustomed to the dark then plot my course to miss chairs and tables, and hop over precarious floor slats. Then do the same in reverse. Our worry about 4 ladies sharing only one bathroom was completely unnecessary. We operated like a well-oiled machine.

The bathroom itself offered a challenge. The sink was so high that it required a small ladder to get your chin over the edge to clean your teeth. We nicked this one from the far bedroom since we were not using it. It was needed there to climb into bed.

To get clean towels or bed linen, you had to climb on the roof of the boat from outside to access a large cupboard where supplies were stowed. Every once in a while the water heater would turn itself off when someone was in the shower, but we called and got instructions for resetting it.

We were very fortunate with weather conditions; however, one day it rained very hard. That was when we learned most of the skylights leaked.

We grabbed every pot and bowl from the kitchen to catch the drips. Mieke called the owner to report the problem. We were laughing so hard our sides ached. The very next morning, owner Paul showed up with a big box of chocolates and a bottle of champagne to apologize for our inconveniences. We were still laughing.

My favorite part about living on the houseboat was spending the time together. In a hotel, everyone goes off to their room, you order room service or have to get dressed and go out for breakfast or coffee. On the boat, we made coffee and breakfast together and sat around in our pajamas planning our day. Late in the afternoon, we would sit out on the deck drinking wine, snacking, and watching the activity on the Amstel River.

As I mentioned previously, houseboat living is not without its challenges and is certainly not for everyone; however traveling itself requires all of us to step out of our comfort zone and be open to new experiences. I had a fantastic holiday because the people I was with were amazing.

P.S. Stay with me for more about the trip.